What’s the story behind The Forgotten? How was it introduced to the world and how many people are involved in the project behind the scenes?
The roots of the project are the podcast series, this dates back to 2009, when I had a weekly slot on a London internet radio station called Fnoob, then I received the offer from another space on DI.fm (Digitally Imported). It was a one hour slot once a week, in one show I presented my records, and in the other, I had a guest.
It was a ritual, we were a small community that met every day in a private Facebook group to listen to the program while we did our daily activities, we created an event on Facebook for the program to express our thoughts about the show in real-time.
In 2011, I decided to formalize the project, I worked on a sound and graphic identity. I was always trying to present the talents that I considered to have good musical and technical taste, all of them were artists from the underground scene, some were just DJs, others were also producers. “The forgotten” of the musical circuit of their country.
In 2015 I’ve decided to approach the project from a different angle as a promoter, so I started to organize events in Mexico City, I remember that the first guests were the Swedish duo SHXCXSHCXSH, they inaugurated this new stage.
It’s funny, many people believe that there is a group of people behind the creation of the content, but no, I do absolutely everything except for the event graphic design, and there is also a small staff that is foreign to the project, they are in charge of the assembly and are a part of the production during the events.

How would you describe its philosophy?
The essential idea was to create a platform that could boost the work of all that talent that is hidden or «forgotten» due to lack of contacts in the media, those who don’t present their work due to fear of criticism or because it simply doesn’t belong to the small groups that are made in the scenes of each country, the “collectives”.
This idea was a reflection of what I came to experience in the scene in my city or with other streaming platforms as a DJ, so I thought “I will make my own door”.

At ‘The Forgotten’ there is always a place for emerging artists or those who are better established.

What is your personal story and how did you open the world of electronic music for yourself?
Personally, my taste for electronic music started when I was 10. Of course, I didn’t listen to techno or industrial, but I did listen to a lot of psychedelic rock, 80’s music, Italo disco, high energy, dance, and rap. My music dealers were my mother who is a music lover and she’s a music collector in different formats, also an uncle, who at that time was living one of the best stages of hip hop culture. I also give credits to the friends of the breakdance collective that I was part of, we exchanged a lot of music on tapes and acetates.
At 14 years old, I was very attracted to the DJ culture, I decided to learn how to play, at this stage I started with styles more focused on hard trance, hard techno, and pure electronic. Over time one style took me to another, I specialized more and more until I reached industrial techno, EBM, breakcore, and cold wave.
Years later I decided to professionalize everything, and well … everything was born.

What’s the nightlife like in Mexico City and how would you say it progressed and changed over the past decade?
I think Mexico City has a wide cultural panorama, not only focused on music. We are more than nine million inhabitants, so there is a strong diversity: many urban tribes, styles of music, concerts, cultural activities, bars… but we have a very weak club culture.
I have had to live a difficult stage in terms of security since there is not enough support from private institutions or the government to develop this type of cultural proposal.
The nightlife also has destructive elements: mafias, drugs, egos, personal interests, it is a kind of cancer that makes the environment sick. But despite all these difficulties, many colleagues and collectives, like me, hold on to continuing to contribute something, each in his own way.
Personally, I have never felt part of all this, but I know that the platform has contributed something positive so that the nightlife continues to live. This country has a lot of potential, we just need to start doing different things to have better results.

The Forgotten has been active since 2011. What were the biggest challenges you faced at the very beginning?
I think one of them is the geographical location, I am on the other side of the world from where I think, it is one of the most solid movements in regard to electronic music occurs. More than half of the collaborations are with Europeans.

Sometimes managing to transmit that spark that communication in person gives  is overshadowed by cold emails or video calls.

Another challenge is that I have never had a guide or a manual that would explain how to do things, what steps I must follow, so falls and failures have been my teachers.
Also, the community that we address in this country is very small, it is difficult to pay for events in the city, besides that there aren’t many regulated places where these type of proposals can be presented.
There is also a toxic public relations process to promote events in this city, I don’t like it, so it becomes difficult if you are not part of the circle.

What are some challenges that you are facing now?
I think doing everything myself sometimes limits me a lot, I need to open the doors to more creative minds, who can edit, write, or manage social networks. The profession that I’m passionate about in the same way, sometimes takes up a lot of time and I neglect some details in The Forgotten, or I don’t have that scope that I could have if I put all my energy into the project. I need to start delegating activities.

You’ve also started your own series of events in 2015. How have those evolved over the years?
Events have evolved a lot. In the first editions between 70 and 80 people attended, now it has grown, we have had editions where the capacity has been 700 people, an important number for that type of proposal. We have also tried to take care of the details that were neglected in the first editions, for example, to have the best audio, lighting, visual, customer service, etc.
Part of these good results are thanks to colleagues who have dared to build infrastructures thinking of proposals such as this, where music, the audio system, and the atmosphere are the most important

Out of all the artists you’ve met, who struck you the most in terms of personality, on a human level?

Each connection with each artist has been special, I always try to forget about the promoter-artist commitment, I am interested in knowing more about the human being than about the artist behind an alias.

I’d rather that they know part of our culture and country… Thanks to this I have created friendships with Headless Horseman, Ancient Methods, Sarin, and Makaton.

What is the most memorable gig or party you’ve attended and what made it so special for you?
Each event is memorable, the fact that all the artists (except Rrose and Luis Flores) have performed for the first time, makes it special.
Having inaugurated with Sarin, Talker, Vril, and Ø Phase in two events that operated in a former flour factory which has been converted into a cultural forum – that was a great challenge. It is located in a non-popular area of ​​the city. Also the Eomac live, Headless Horseman, Ancient Methods and Polar Inertia have been very special for me, I learned a lot from the technical part of their set up.

What have you learned about yourself through The Forgotten?
I have broken many many creative-mental cages, I have also developed many technical and professional skills.

I’ve learned that you don’t need a professional degree or a personal recommendation to do the things you love. Perseverance and discipline are strong tools to accomplish any goal.

I think that getting to know people from all over the world, learning more about their customs and culture is one of the most special things The Forgotten has given me human ties.

What recent trend annoys you or upsets you?
I think sometimes we present emerging artists and people often don’t support them in the same way, I think they should receive the same support as an experienced artist.
I also usually upload tracks or mixes focused on pure electronic or other genres that don’t contain techno or industrial, and the public didn’t receive them in the same way.
I think the audience should open their musical spectrum a little more … it isn’t annoyance, it is just very curious to me, hehe.

Could you share a funny or bizarre story from your time with The Forgotten?
Imagine that it is your first event, the tickets are sold out, SHXCXSHCXSH mounted a two-meter set-up with hardware, ten minutes before opening the doors the police arrive and decide to close the club because it doesn’t comply with the documentation.
People that night dismounted despite not knowing me, they were supportive. One of the attendees contacted me with another club and the party ended there, the money was not recovered but the live performance of the Swedish duo was incredible.

What truth have you learned after all these years you’ve learned?
That artists are human like us, have a personal and sentimental life, so never be a stalker or a groupie.
Also, we should never perceive artists as those who never get tired, nor should we compare ourselves to anyone.

We all have unique abilities and gifts, so no one is better than anyone else.

What interests you outside of music?
I really like helping people to solve their problems or needs, I am a specialist in International Trade, I have a consulting office in health regulatory affairs, and I work for a company. At these moments I am also studying biomedicine to apply it in the health sector. These are noble professions that contribute to society.

For someone who has never been to Mexico City, what is your personal advice of things to do and things to see?
I think that some prejudices that have sold badly in the news programs or television about Mexico must be made rid of: not all of us wear a charro hat or drink tequila, nor are drug traffickers that could be found in every corner of the neighborhood. It is a country that has very serious political, economic, and social difficulties, which must be resolved immediately, but it also has many positive and beautiful things to offer the world: its gastronomy, its wide culture, biodiversity (flora/fauna), the weather and landscapes are some of the best in the world.

What are your future plans and do you have a certain goal in mind?
I think the platform should be immortalized, that is why I am working on the record label, I have already prepared the first two EPs. I am also working on some fashion designs, special edition garments that will be released soon. The platform will also go from being a blog to a digital magazine. 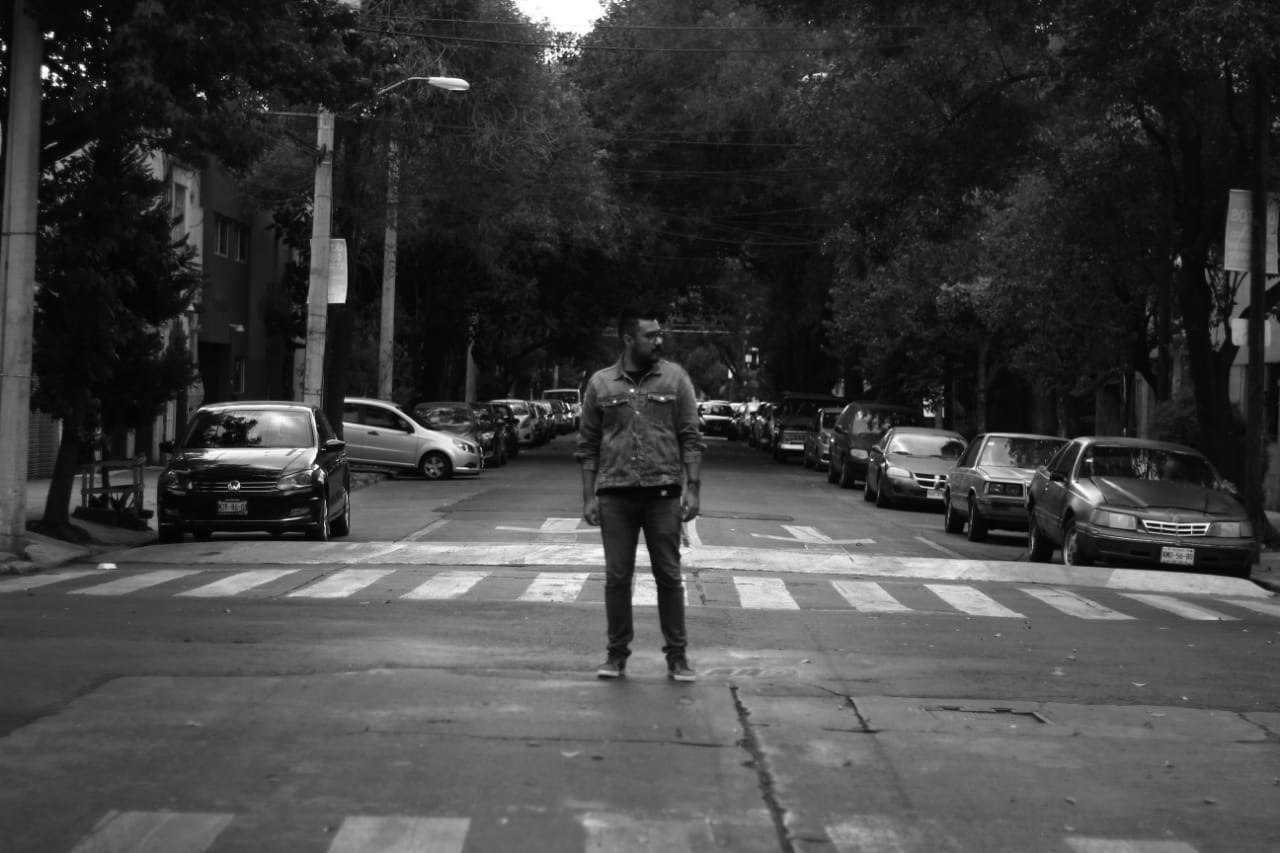