What is great about your life right now?
Niv: It’s really great that I have much more time to spend with my wife and my newborn baby girl. I’ve also been able to build a more constant routine which helps keep me focused and relaxed. In an artistic way, I feel that the current situation has given me a chance to self-observe and be able to dig deeper into my craft.
Dori: The first thing that comes to mind is the fact that we don’t have to travel. I can’t remember the last time I was in the same place for 3 months. I can do more sports and so on.

What drew you to music? When did you first experience the power music carries within itself?
Niv: I think it started within my family. I was always surrounded by music. My parents would sing to us all the time and my dad taught me how to play guitar and to sing. It was at high school though when I really got addicted to music and fell in love with the idea of being in a band. I’m not sure if it was the first time I felt the “power”, but I remember one time during 5th grade there was a ceremony at school after prime minister Rabin was murdered, the girl that sang wasn’t very popular before the ceremony, but she sang in such a pure and emotive way. Everyone cried and I went home as it was too much for me and extremely powerful.
Dori: I always enjoyed music and the lifestyle that comes with it. Whenever I was young and I saw bands or performers, I would long to be them or be with them. It looked like a more interesting and fun way of living.

What were your mindsets when working on this self-titled album?
Niv: It’s our third album but we have released many EPs and remixes along the way. Our music is mostly directed and associated with clubby environments and doing an album is a way to check these borders more carefully. We did two albums that told a story about us and about our musical path. In the past three years since the last album we played a lot of DJ sets and live gigs, so this time we felt our image was clearer. The mindset was to bring an atmosphere that combines the energy we bring live on stage and in the DJ sets with a notch of DNA spice.
Dori: We really tried to capture our life over the past few years. There’s been loads of clubs, festivals and touring. We also wanted the album to sound as one unit when you can just press play and enjoy.

What does it feel like to witness a finalised piece of work that began as an idea in your mind? How did you feel once you released the ‘Red Axes’ LP?
Niv: It feels good. It’s a strange time to release an album during this world pandemic but there’s also a good side. We have something creative to mess with and also allows us to bring some real output to the world, while we can’t really play gigs and do our normal job.
Dori: For me the work on the music before the album is the real thing that makes me happy. When it goes out it gets a life of its own, so I’d say the process makes me more excited.

Do you let an idea freely take whatever form it wants, or do you tend to follow certain guidelines when creating?
Niv: I can say that there’s a certain guideline, but I think we try to focus on the best idea that we each like in a specific moment and then build a guideline around this idea. Things can go pretty random from there.
Dori: Usually yes. I can say 90% of the time it’s not my idea and I just go with the flow and then sometimes we come up with an idea. I find the things the machine gives me or things I find by mistake tend to be more interesting.

Do you feel an obligation that your new work should be better than everything you’ve done before? Is it difficult to continue to evolve as you get more experienced?
Niv: I feel that we are progressing naturally with our careers. We always did what we wanted and tried to be sensitive to the places that went to and to each other. I want to think that we get better and evolve all the time. I can tell you that we’ve put a lot of effort in but honestly, we can’t really judge that now, time will tell. For now, I just want to keep being inspired and create, and I think that we can always learn new things. So, I cannot say that it’s difficult, it’s a question of what you want to do with yourself and with your life.
Dori: Definitely yes. I always search to be better and more interesting. It’s not actually a fun thing and can be very tiring. I find doing the same thing over and over is boring.

Who is or was the biggest teacher in your lives?
Niv: I was always inspired by my parents as I learned so much from them. I’m really lucky to have them because they taught me to give and get love. The relationships with my wife Eden and with Dori are very influential as well. I’ve learned a lot about life and about myself through these relationships.
Dori: I’ve got a few of them but the first one that jumps into my mind is one of my first tennis coaches. This amazing guy taught me that you don’t have to be normal or be like anyone else. You can live your life as you see it, even if some people will never understand you. He also took me to loads of trance parties.

Do you think that the growing emphasis on the artist’s ‘personality’ in the digital era is diminishing the value of music? Do you think that we enjoy art partly because of the creator’s personality? How do you see this evolving in the future?
Niv: The personalities of artists I like are shown in their creation in a way, I’m not sure that the digital aspect plays as an emphasis on the artist’s personality much, I’d say it’s more of a focus on the artist’s “persona” which for me is less interesting. I don’t know about the future yet. Maybe there will be a consciousness revolution and people will be motivated differently, but for the near time I think it will be the same for me, and I’m ok with it.

Does life make more sense for you as you get older?
Niv: In the past I’ve had less experience and I knew less. I still don’t know everything but I’m more aware of the things that I don’t know.  As I get older, I recognize more and more responsibilities in my decisions. Some decisions will help me make sense of things and bring me peace.
Dori: Life will never make sense to me, it’s a very weird thing. When I was younger, I think it made much more sense because I knew less, and it was simpler. I guess with time I learn more about what is good for me on this planet.

Was there ever a moment when you were fed up with music?
Niv: For moments yes, but it always came back. Sometimes after a long and full weekend I don’t want to hear music for a few days. It’s a matter of balance for me.
Dori: Every day.

If you could have a conversation with any historical or famous person, dead or alive, who would it be and why?
Niv: There are so many options. I always choose George Harrison because I love him so much, but I’ll change. I’ve had some hopes that life in music will help me meet Genesis P-Orridge, but not anymore. I wish I could though. Why? Because of their intelligence, bravery and honesty. I have some questions I’d like to ask them about fears and magic powers.
Dori: I’d talk to Moses that got the 10 commandments, he sounds like an interesting guy. Or maybe just another schizo guy…

Looking back at your music careers as Red Axes, what are some of your favourite and craziest memories?
Niv: The first year we started to tour the world was full of memories and excitement. It was the beginning and every night was special to me in a different way. But if I need to choose one favourite memory, I’ll choose the first Garzen festival we did in the Israeli desert with all of our friends – it was crazy fun for me.
Dori: Playing in Chicago for 4 hours in a sex party was something rare and different. We’ve played in some weird places, but this was next level.

If you were a music instrument, which one would you be and how would it reflect your personality?
Niv: I don’t know what music instrument I am, but I would like to be a good equalizer and cut some frequencies here and there.
Dori: I think I’m a modular synth as my moods change a lot.

What is the wisest thing you’ve heard and do you tend to follow this piece of wisdom?
Niv: Yes, my father taught me what his father taught him – always to be large in small amounts. He also told him to try to be smart and not wise.
Dori: Go home is the wisest thing I’ve heard or hear on many nights. It’s very simple and smart. I really try to follow this wisdom but it’s not always easy.

What question would you like to be asked in an interview and what would your answers be?
Niv: ‘What are your favorite 11 players that have played during your life?’ (football, of course). My answer: Buffon, Paolo Maldini, Javier Zanetti, Toni Adams, Carles Puyol ,Eyal Berkovitz, Maradona, Totti, Thierry Henry, Gabriel Batistuta, Ronaldo Nazario “O Fenômeno”
Dori: ‘Why is the water blue?’. My answer: Ask Niv. 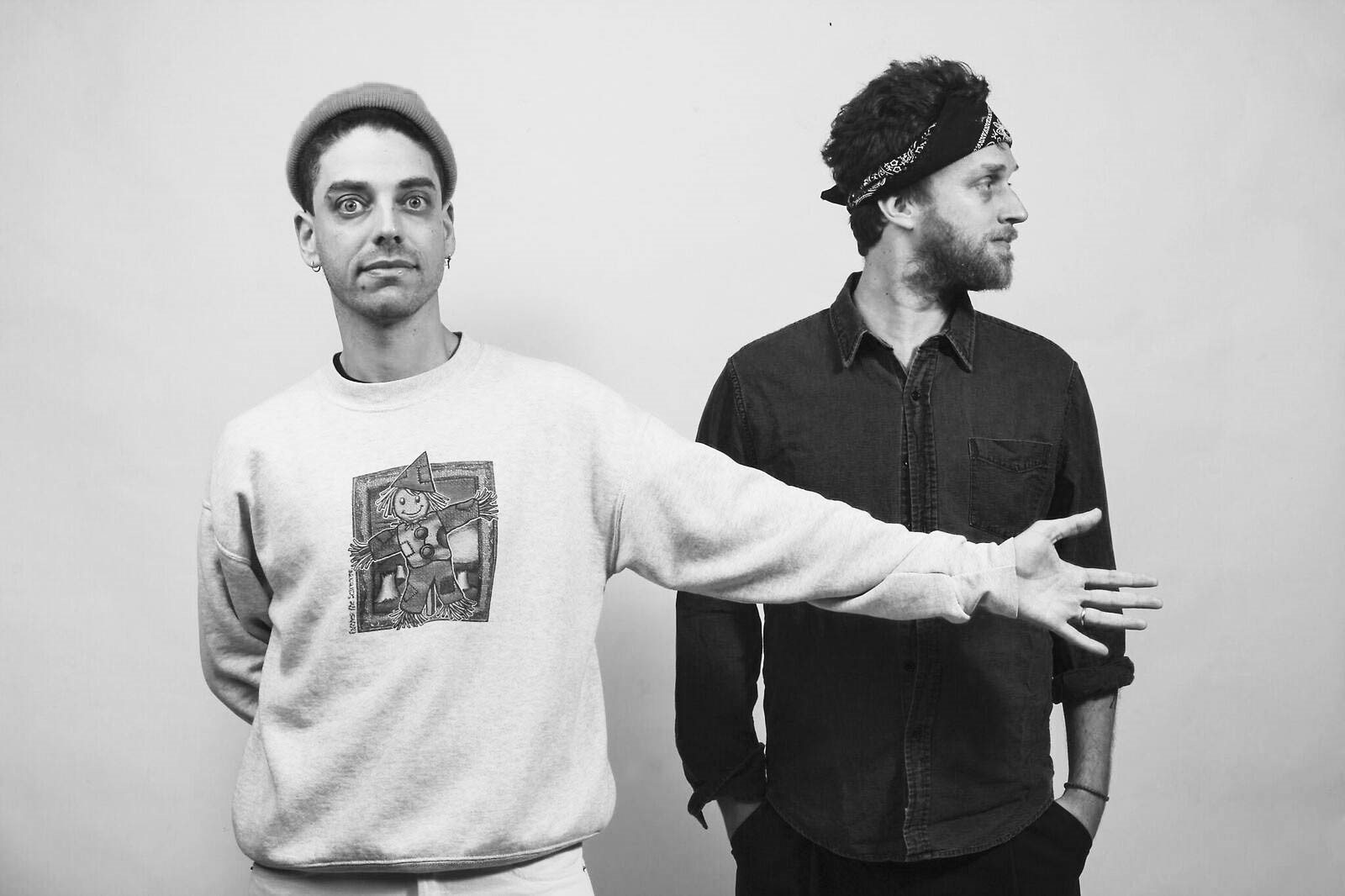