You’ve had a lot of interviews, which questions do you dislike being asked?
Great question! Because in almost every interview we are asked to recall a fun adventure tale. “You must have so many stories“, they say. Then you realize that you are a boring storyteller, and your life is quite boring, and there are no adventures. But when those adventures do happen, we are living people, after all, then we try to memorize these stories in case a journalist asks us again. And when they do – you forget it all as if on purpose.

What have you learned thanks to DakhaBrakha, both personally and professionally?
Punctuality. You know, it’s a very convenient thing and it represents respect for each other. In the last 10 years, we all come to rehearsals on time, with exceptions if something serious happens. We want to do the same respectively at concerts, but it doesn’t always depend on us. This professional trait is projected on our personal lives as well. You get used to such basic things, and then it turns out that for many in our society, punctuality is in a sense an unattainable luxury. Yet at the same time, everyone has access to it. Try it out if you haven’t haha.

What did you learn from each other?
I am lucky to work with very strong vocalists. I am constantly learning the craft of singing with them. I teach them how to sing the wrong way. And we’ve started out with the light hand of Vlad Troitsky. He remains a teacher and a master for us. It was he who gave us the idea that anything is possible. You just have to put in the work.

If looking at DakhaBrakha as a single human organism, which part is each one of you?
I think if we were an organism, then it definitely wouldn’t be a human one. Rather, a monster with four mouths and eight arms. By the way, it’s an interesting image. I should visualize it someday as a DakhaBrakha designer.

Teaser “DakhaBrakha: On the Road”

Were you ever tired of music?
Frankly speaking, it’s very easy for that to happen. Listening to music is a process that requires focus. For me, music can’t just be a background sound. Ever since I studied at university, I envied those people who could write their academic papers while listening to music. I also rarely walk down the street wearing headphones because I can walk way too far. I listen and disassemble music into parts, sounds, instruments, and voices. This process consumes a lot of energy and is tiring. It’s a bit different when it comes to music that is created for the purpose of dance or fun, in that case, the body gets tired, not the mind.

Do you think it’s possible to judge music objectively?
I don’t think it is. It’s not a sport where it’s clear who came in first, or who scored the most points. The number of records released or those in the charts gives us an understanding of the diligence or popularity of musicians, respectively. Competitions and awards are more about performative skills.

If anything, only time can give an objective evaluation of music.

What modern trend annoys or even frightens you?
It’s upsetting that modern people yearn for simplicity. It ranges from both ordinary small things that surround us to more global processes of civilization. I look at the evolution of social networks, and textual content is becoming more primitive and is limited to a few pages or sections that require a few seconds of one’s time.  People do not want to overthink, they’d rather have fun and think less. During elections, people vote for those who offer simple solutions to complex problems. Most likely, we’re just at a certain stage of society and its development. We need to acknowledge this, respond to these trends, and move forward accordingly.

If you could eliminate anything in the world, what would it be?
Well, when you hear all this data on the number of infected people who have died from the pandemic around the world, then you only have one desire, even if utopian – to rid the world of all diseases. But then you understand that everything in the world exists for a reason. Apparently the planet wants to take a break from its most annoying inhabitants. And it gives people the possibility to restart the system, to rethink our actions and deeds. But whether humanity will seize this opportunity remains a big question. 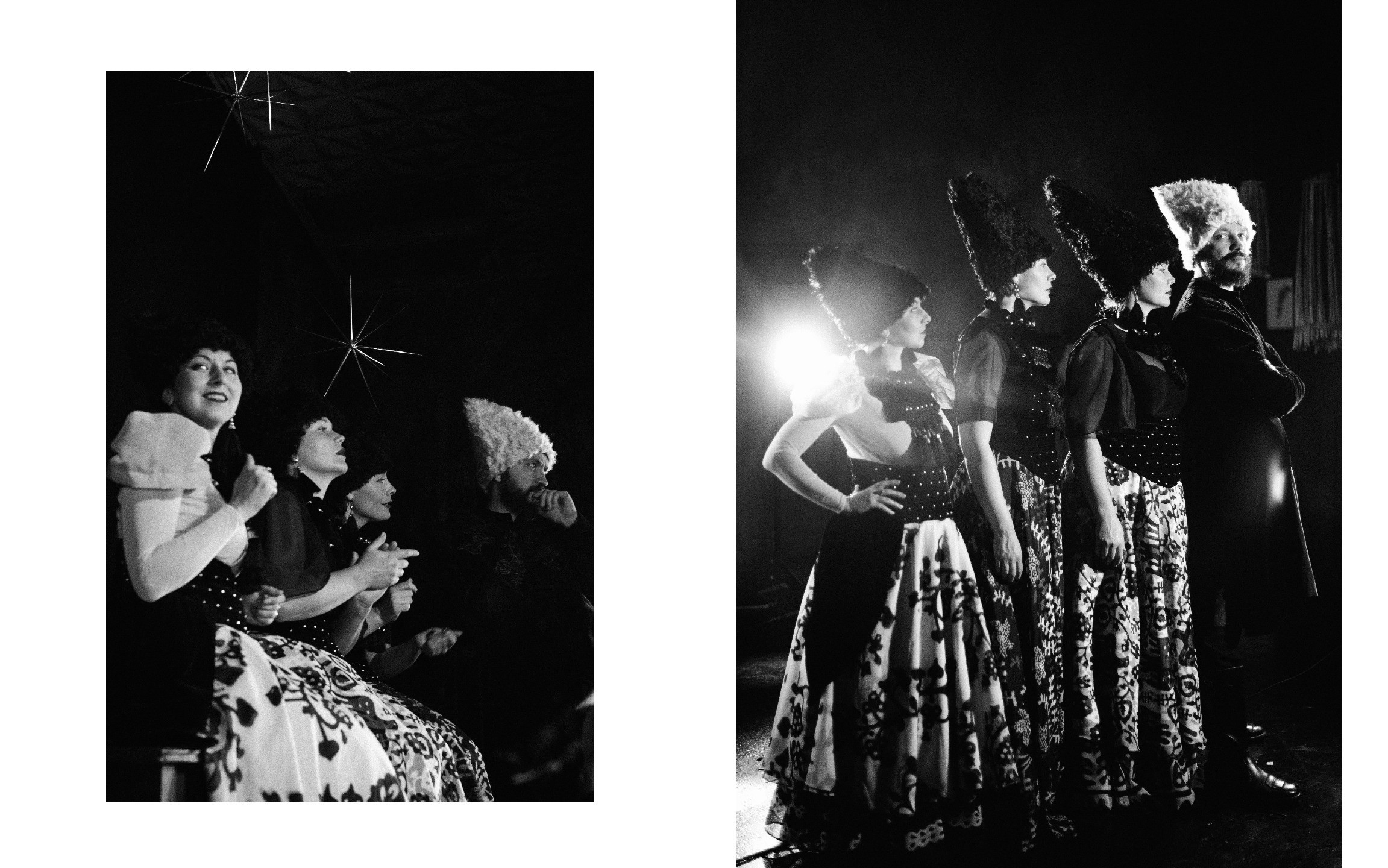 What piece of advice would you give to humanity?
It’s too big of a responsibility and ambition to give humanity advice. I haven’t grown enough to do that sort of thing. I can only call for action. Let’s plant trees. My dream is to mark one day in the calendar when everyone would plant a tree. Imagine the number of trees growing by several billion every year. Given the situation with the fires on our planet, a flash mob like this one would be essential for all of us.

Do you face any disagreements when creating music? If so, how do you compromise, if not, why not?
Of course, we face differences, even though we are one organism haha. There are billions of ways to generate a musical composition, and you don’t know which way would be the best one. And does the perfect option exist at all? We try to find, as politicians say, a “compromise solution“, and in order to convince each other, we argue our positions. I think it happens in all bands that don’t have a particular leader.

What film and book could you recommend? Is there a fictional reality you would like to experience?
My choice will not be extravagant, supernatural, or underground, but I will name the famous cultural masterpieces of the world: Antoine de Saint-Exupery – ‘Planet of the People’. Arguably the most important text of the twentieth century with his attention to detail and at the same time it’s a global humanistic vision of humanity, with all of its problems, joys, and shortcomings. Film-wise I would go for something relatively modern – ‘Tony Erdman’ by the German director Maren Ade. It is a reflection of our time, where a person finds himself in a lifelong career and success marathon, and because of that loses all his vital ties with his childhood and family. He loses his perception of the essence of happiness. The film is very witty and subtle.

Your art is quite complex, and nowadays people are attracted to simpler things. Does it bother you? Do you think art requires deeper meanings?
Not all of our art is complex. There is an outspoken fun aspect to it that we did in a cheerful mood and for the sake of a cheerful mood. But yes, there are aspects that the average listener will not understand, or find it difficult or boring. But we never ask ourselves whether someone will understand it. We do things as we see fit and we create music depending on how we feel at a specific moment. Time has shown that the ‘complexity’ of our art is comprehensible to a large number of people who are willing to perceive, hear, and feel our musical emotions and vibrations.

What’s your personal definition of beauty and how do you integrate this beauty into your work and into your life?
As of recently, I began to realize that for me, beauty lies in harmony – the harmony of human coexistence and one’s harmony with the environment.

What do you feel when you look back at your life?
I like it that when I look back on my past, I don’t have any feelings of nostalgia, sadness, regret, or anything like that. I remember a situation when, as a student, I was on vacation with my parents in the village, and one of their acquaintances who was their age began to ask me about my student life and my experience living in the dormitory. He then recalled the times when he was young and he was so bittersweet about it, he said that those were the best times of his life. Fortunately, now being the same age as that man was, I realize that every stage of my life consisted of something very important, something very pleasant and intimate. I wouldn’t even pick one period over any other. I always tried to live by the rules and guidance that my parents and my family gave me: to appreciate the present and to be thankful for what you have. So, even in quarantine, I’m doing fine. I’m trying to do the things that I’ve always wanted to do, but never had the time for. I simply don’t have time to reflect on the past.

What was the wisest thing you’ve ever heard in your life or what truth have you discovered?
I always hoped that I would answer such questions as a gray-haired old man, but it turns out that the time has come. And now I really have to think hard, because the one truth I discovered in life can’t be something in likes of ‘don’t burn dry grass’ or stuff like that. The wise things are still yet to come, I hope.

One thing I did realize is that you shouldn’t jump to conclusions, be it about people, their actions, nor about events or processes. Especially in our times of fake information, black PR and murderous propaganda. It’s necessary to give time to air out any given information, or, on the contrary, to insist on it, depending on the situation.

So let this be “my” wisdom at this stage of my journey.

What is your goal as an artist? How do you want your work to echo in the culture?
We rejoice when contemporary artists thank us for being their inspiration and for giving them the strength to create. Because for many musicians and singers it became evident that the folk song tradition can achieve good results, be relevant and in demand, it can be appreciated even abroad. Any successful worldwide national cultural case is very helpful for young artists to overcome the inferiority complex that has been imposed on Ukrainians for centuries. We are happy to be among such cases. On the other hand, we have to present the Ukrainian culture to the world, not in all of its diversity and versatility, but only through our interpretation of music, which has its origins in the folk tradition. What we see is that we are a good “bait” for foreigners who are eager to discover something new and unusual.

What question would you like to be asked in an interview and what would you answer?
I once thought of a very bold analogy in case someone asked me which artist or artistic direction I would compare the music work of DakhaBrakha, which I would like to share now:

Our music is the art of Maria Pryimachenko if it were sound.